A restoration project for an old friend. I really enjoy restoring old pictures like this. In this case, this was about the only photograph this family had of these two brothers, so they were thrilled to get the restored image.

...And  you just know there is a story behind this picture. Read their story below the photo. 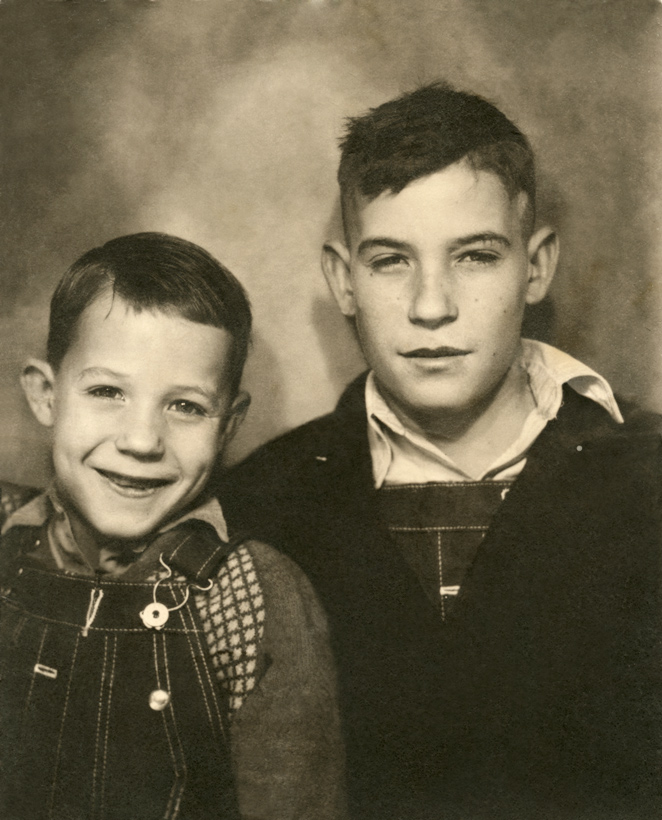 Uncle James was the 5th child of 7. Born in 1929. Grace Burton Gable and Charlie Gable (share croppers). Never owned their own home and worked the crops for housing and received a percent of the sale of the crops for living expenses. Charlie was a man who worked the crops and plowed the fields all week, working his children also in the fields, and then on the weekends he drank heavy, spent money foolishly, and had a violent temper. Children were kept out of school when the crops needed tending and education came second to making sure the crops were 1st. Grace was a gentle caring mother and worked non-stop to hold it all together and had a milk cow, a few pigs, and chickens to keep food on the table and a vegetable garden to keep food on the table. Charlie would hide his whiskey in the various outhouses on the property and also felt strongly about the "right to have guns" to protect his family. But guns and whiskey were not good things to have around the house...when Uncle James was about 10 or 11 years old, his mother found him passed out on the ground and she thought he was dead but he had found his dad's whiskey and had drank to the point of passing out. During this ordeal, the family realized he had been watching his father in the out buildings and had been taking a drink from time to time and this passing out episode was not the 1st time he had drank. Alcoholism and addiction issues ran in the blood line...so Uncle James became addicted to the alcohol at an early age and craved it. The situation at home continued to deteriorate as bad harvest years put the family in debt to the landlord for living expenses and the stress the oldest son Americus also took up the bottle and began going with his dad on his weekend binges. One night Americus and his dad came home from a drunken weekend and were arguing and violent toward one another, the dad had a loaded shot gun and was waving it all around in the house, with the younger children crowded around the fireplace in the floor and Americus went over to try to get the gun from his dad and it went off killing the dad in the middle of the floor in front of the children......Tragically ending his life..

Grace now had 7 children (most of them troubled) and nothing. They were forced to leave because they could no longer do the crops and local relatives were poor and unable to provide much support. Grace took on cleaning houses, ironing, and a cousin had a small 4 room house they were able to relocate to and just as they were getting settled in Grace reached over to tie her show and died of a heart attack only 18 months after the tragic death of Charlie..no foster homes, no welfare system, no social security and very poor extended family left the 7 children to make it on their own....Americus was drafted WWII, Aunt Leola went off and married a much older man with one eye, Aunt Virginia had mental health issues and ended up in the State Hospital in Tuscaloosa, my mother was in the 11th grade and had to quit school, moved in with a girlfriend and her family from school and went to work, Uncle James ended up with the relatives who were alcoholics and continued his demise and also ended up in the State Hospital in Tuscaloosa several times, Aunt Charlsey ran off and married a man who was heading out for WWII became pregnant and had a baby girl, then she ran off with another man while her husband was in WWII and gave up the baby and left town, Uncle George was probably about 7 and went to live with Aunt Leola (with Uncle James was in and out with Aunt Leola home too) and the picture that you did was taken at a carnival that Aunt Leola had taken them too in town and they had their pix made! Uncle George was 8 in the pix and Uncle James was 14! Looked like he was probably drinking that day too..

When WWII was going on, mother was able to get a better job at the plant where they did ammunition for the war and that is where she met my dad and they got married and she went and got Uncle George and he was always part of our family, he was about 10 when he came to live with my parents...and the rest is history..My dad was unable to go to WWII because he had been kicked in the head by a mule when he was a child and part of his skull was missing (another story) so he was working at the ammunition plant too.

Mother also told Uncle James he could live with them too, but he would have rules and he opted not to take them up on the offer...he spent years in jail and prison..drinking..fighting..stealing....and ended up with lung cancer and my mother went and got him released from prison and she and Uncle George and Aunt Leola took turns taking care of him with hospice until he passed in 1999.

Aunt Leola and her older husband had one child and divorced later as for the rest of the family, the only two that ended up having lives that were kinda "normal"....were my mother and Uncle George...